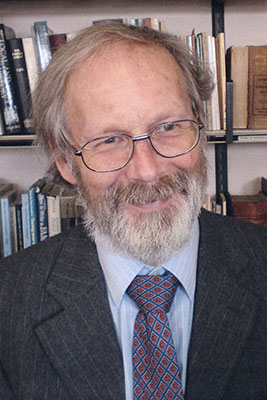 Although perhaps best remembered as a maritime historian, John Armstrong (1944-2017) also made significant contributions in other areas of transport history and in business history.  John’s first degree was from the Polytechnic of Central London (now University of Westminster) under Philip Bagwell, who hired John as a new graduate to work as a research assistant on his seminal 1974 work The Transport Revolution from 1770.  John also collaborated with Philip Bagwell on chapters in Transport in the Industrial Revolution (1983) and Transport in Victorian Britain (1988), amongst the first of 84 papers that John was eventually to write or co-author.

The once-neglected field of coastal shipping was one which John made very much his own, with contributions including work on shipping’s relations with railways, the conference system, development of trade routes, freight rates and coastal shipping’s role in pioneering technological change.  Many of his papers were collected in The Vital Spark: The British Coastal Trade 1700-1930 (2008).  Collaboration with David Williams resulted in some 20 papers on the development of steam navigation, a selection of which appeared in The Impact of Technological Change: the Early Steamship in Britain (2012).  John’s wider interests in transport also saw him become a long-running editor of the Journal of Transport History, and heading the team that edited the Companion to British Road Haulage History (2003).

John’s impact in business history was also significant, including editorship of the Journal of the Business Archive Council from 1984 to 1988, and co-authorship with Stephanie Jones of Business Documents: Their Origins, Sources and Uses in Historical Research (1987). Following post-graduate studies at LSE, John was appointed as a lecturer at Ealing College of Higher Education which subsequently became Thames Valley University, where he held the Chair of Business History until he retired.  He is particularly remembered for his contributions to the pioneering seminars run by Derek Oddy, which are considered to have helped business history to become a mainstream topic at British universities.

In his roles as journal editor and convener of the BCMH’s series of seminars at King’s College, John was very keen to encourage others in their research. The present writer is undoubtedly not alone in knowing John as first a highly-supportive doctoral supervisor who then went on to became a genuine friend.  It is hoped that the John Armstrong Prize will be a fitting commemoration for both a notable and influential scholar, and a man who is held in very considerable affection by those privileged to have known him.

David Proctor, who died in July 2000, was a man of wide culture; his interests embraced maritime history, the arts, music, and much more. His book Music of the Sea demonstrated the breadth of his scholarship, ranging over the centuries and drawing on his research in many European archives.

David was a founder member of the British Commission and its first Secretary. He inaugurated the King’s Maritime History Seminar which he organized for many years. The annual Proctor Memorial Lecture is dedicated to David.

An obituary to Patricia Kathleen Crimmin BA, MA, MPhil, FRHistS., ex Treasurer of the BCMH, was also published in the February 2021 edition of the Mariners' Mirror.

Patricia (Pat), who passed peacefully after a short illness on 4 October 2020 was universally admired for her scholarship as a historian specialising in eighteenth century naval history, and as an inspirational lecturer.

During the Second World War, Pat and friends were strafed by a Messerschmitt 109 and emerged unscathed; she was one of the few female naval historians taught how to arm and throw grenades in case of enemy incursion.

Her university teaching career began in 1962 on her appointment by Professor Joan Hussey as a lecturer in history at Royal Holloway, University of London. In 1965, as a postgraduate student of Gerald S. Graham, Rhodes Professor of Imperial History at King’s College London, Pat completed her University of London MA on ‘Admiralty administration, 1783–1806’, and in 1967 an MPhil degree on ‘The early life and services of Sir John Jervis, Lord St Vincent, and their influence on his later career and character’. Professor Graham was particularly proud of having a student who had reached the finals of BBC Radio’s Brain of Britain contest. Hardly surprising as Pat continued to be extraordinarily knowledgeable on an impressive range of subjects

Pat’s scholarship of the finance, personnel and administration of the British navy at the time of the Napoleonic Wars has stood the test of time and revisionism. She published regularly in academic journals and contributed articles on dead admirals to the Oxford Dictionary of National Biography. On her retirement as a senior lecturer, she continued to work on the health of seamen, including the care and treatment of British-held prisoners of war during the Napoleonic Wars and on the fifteen volumes of Nelson manuscripts held in the Wellcome Library for the History and Understanding of Medicine.

In 1997, Pat was Awarded the Julian Corbett Prize for ‘Letters and Documents relating to the Service of Nelson’s ships 1780-1805: a critical report’, Historical Research, vol. 70 (1997), pp. 52-69. She served as a councillor of the Society for Nautical Research, and as a vice president of the Navy Records Society from 2000 to 2004 and as a member of the NRS Council from 1982-2007. For over twenty years, Pat also served as treasurer for the then largely impecunious British Commission for Maritime History.

Pat was also a member of the Editorial Board of The Mariner’s Mirror through the tenures of four Hon Editors of that august journal. During her retirement she was awarded a Senior Caird Fellowship (1998-99) at the National Maritime Museum, Greenwich, where she engaged in a survey of the papers of the Commissioners for the Care of Sick and Wounded Seamen and of Prisoners of War, more commonly called the Sick and Hurt Board, between c. 1700-1806, which resulted in a number of articles in learned journals. She was later an Honorary Research Associate at Greenwich Maritime Institute, University of Greenwich. There, Pat devised, and at first taught, the MA naval history course.

Pat was also an assiduous attender of academic conferences around the world and her approach to naval history was rigorous. She had, according to Professor Roger Knight, ‘a  gimlet eye for pomposity and pretentiousness’ and was a withering observer of human character but had a gentle way of expressing it. Pat also gave tremendous encouragement to new scholars. It was something that defined her. She despaired of public ignorance or indifference to maritime and naval history but delighted in anyone who showed willingness to engage with it.  She saw her role as a university lecturer as a tremendous privilege and responsibility and sought through the subject of history to understand the world and society, and to reveal this to students; not to train them to be ‘consumers’ or ‘customers’ or ruthless self-publicists, but to live a fuller, better life.

Latterly, Pat’s later years were burdened by ill health, particularly arthritis and later chronic leukaemia, which she bore stoically. Despite this, she retained her quizzical and mischievous sense of humour and her sense of social justice remained undiminished, as did her unfailing loyalty to friends. Pat is greatly missed by her many friends and contemporaries around the world who all share a sense of great loss, tempered by the absolute privilege of knowing her as a friend.